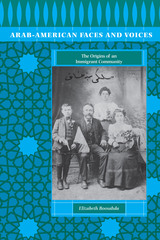 Arab-American Faces and Voices
The Origins of an Immigrant Community
By Elizabeth Boosahda
University of Texas Press, 2003

As Arab Americans seek to claim their communal identity and rightful place in American society at a time of heightened tension between the United States and the Middle East, an understanding look back at more than one hundred years of the Arab-American community is especially timely. In this book, Elizabeth Boosahda, a third-generation Arab American, draws on over two hundred personal interviews, as well as photographs and historical documents that are contemporaneous with the first generation of Arab Americans (Syrians, Lebanese, Palestinians), both Christians and Muslims, who immigrated to the Americas between 1880 and 1915, and their descendants.

Boosahda focuses on the Arab-American community in Worcester, Massachusetts, a major northeastern center for Arab immigration, and Worcester's links to and similarities with Arab-American communities throughout North and South America. Using the voices of Arab immigrants and their families, she explores their entire experience, from emigration at the turn of the twentieth century to the present-day lives of their descendants. This rich documentation sheds light on many aspects of Arab-American life, including the Arab entrepreneurial motivation and success, family life, education, religious and community organizations, and the role of women in initiating immigration and the economic success they achieved.