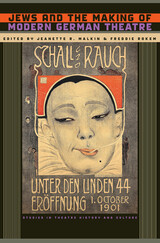 While it is common knowledge that Jews were prominent in literature, music, cinema, and science in pre-1933 Germany, the fascinating story of Jewish co-creation of modern German theatre is less often discussed. Yet for a brief time, during the Second Reich and the Weimar Republic, Jewish artists and intellectuals moved away from a segregated Jewish theatre to work within canonic German theatre and performance venues, claiming the right to be part of the very fabric of German culture. Their involvement, especially in the theatre capital of Berlin, was of a major magnitude both numerically and in terms of power and influence. The essays in this stimulating collection etch onto the conventional view of modern German theatre the history and conflicts of its Jewish participants in the last third of the nineteenth and first third of the twentieth centuries and illuminate the influence of Jewish ethnicity in the creation of the modernist German theatre.

The nontraditional forms and themes known as modernism date roughly from German unification in 1871 to the end of the Weimar Republic in 1933. This is also the period when Jews acquired full legal and trade equality, which enabled their ownership and directorship of theatre and performance venues. The extraordinary artistic innovations that Germans and Jews co-created during the relatively short period of this era of creativity reached across the old assumptions, traditions, and prejudices that had separated people as the modern arts sought to reformulate human relations from the foundations to the pinnacles of society.

The essayists, writing from a variety of perspectives, carve out historical overviews of the role of theatre in the constitution of Jewish identity in Germany, the position of Jewish theatre artists in the cultural vortex of imperial Berlin, the role played by theatre in German Jewish cultural education, and the impact of Yiddish theatre on German and Austrian Jews and on German theatre. They view German Jewish theatre activity through Jewish philosophical and critical perspectives and examine two important genres within which Jewish artists were particularly prominent: the Cabaret and Expressionist theatre. Finally, they provide close-ups of the Jewish artists Alexander Granach, Shimon Finkel, Max Reinhardt, and Leopold Jessner. By probing the interplay between “Jewish” and “German” cultural and cognitive identities based in the field of theatre and performance and querying the effect of theatre on Jewish self-understanding, they add to the richness of intercultural understanding as well as to the complex history of theatre and performance in Germany. 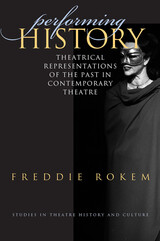 Performing History
Theatrical Representations of the Past in Conetmporary Theatre
Freddie Rokem
University of Iowa Press, 2000
In his examination of the ways in which theatre participates in the ongoing representations of and debates about the past, Freddie Rokem concentrates on the ways in which theatre after World War II has presented different aspects of the French Revolution and the Holocaust, showing us that by “performing history” actors bring the historical past and the theatrical present together.
[more]