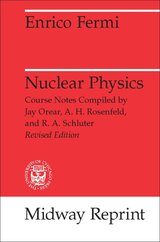 "The compilers of this publication may be warmly congratulated. . . . The scope of this course is amazing: within 240 pages it ranges from the general properties of atomic nuclei and nuclear forces to mesons and cosmic rays, and includes an account of fission and elementary pile theory. . . . The course addresses itself to experimenters rather than to specialists in nuclear theory, although the latter will also greatly profit from its study on account of the sound emphasis laid everywhere on the experimental approach to problems. . . . There is a copious supply of problems."—Proceedings of the Physical Society

"Only a relatively few students are privileged to attend Professor Fermi's brilliant lectures at the University of Chicago; it is therefore a distinct contribution to the followers of nuclear science that his lecture material has been systematically organized in a publication and made available to a much wider audience."—Nucelonics
[more]

The Pontecorvo Affair
A Cold War Defection and Nuclear Physics
Simone Turchetti
University of Chicago Press, 2012
In the fall of 1950, newspapers around the world reported that the Italian-born nuclear physicist Bruno Pontecorvo and his family had mysteriously disappeared while returning to Britain from a holiday trip. Because Pontecorvo was known to be an expert working for the UK Atomic Energy Research Establishment, this raised immediate concern for the safety of atomic secrets, especially when it became known in the following months that he had defected to the Soviet Union. Was Pontecorvo a spy? Did he know and pass sensitive information about the bomb to Soviet experts? At the time, nuclear scientists, security personnel, Western government officials, and journalists assessed the case, but their efforts were inconclusive and speculations quickly turned to silence. In the years since, some have downplayed Pontecorvo’s knowledge of atomic weaponry, while others have claimed him as part of a spy ring that infiltrated the Manhattan Project.
The Pontecorvo Affair draws from newly disclosed sources to challenge previous attempts to solve the case, offering a balanced and well-documented account of Pontecorvo, his activities, and his possible motivations for defecting. Along the way, Simone Turchetti reconsiders the place of nuclear physics and nuclear physicists in the twentieth century and reveals that as the discipline’s promise of military and industrial uses came to the fore, so did the enforcement of new secrecy provisions on the few experts in the world specializing in its application.
[more]