2 books about His Views 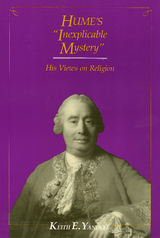 The eighteenth-century Scottish empiricist David Hume has been regarded as a notorious enemy of religion. Still, his discussion of religion is systematic, sophisticated, and sustained. Focusing mainly on two of Hume’s works, the relatively neglected Natural History of Religion and the more widely read Dialogues Concerning Natural Religion, Keith Yandell analyzes Hume’s treatment of a subject that he described as "a riddle, an enigma, an inexplicable mystery." In so doing, he explores the relationships between Hume’s philosophy of religion and his general philosophy.

Hume’s "evidentialism," applied to religion, can be summed up by saying that it is unreasonable to accept a religious belief unless one has evidence for it. Since it is also Hume’s view that there is no evidence for any religious belief, he concludes that no one is ever reasonable in accepting a religious belief. Yandell examines the explanations that Hume gave for such acceptance in Natural History of Religion. Addressing the Dialogues Concerning Natural Religion, he compares Hume’s views to those of such authors as Herbert of Cherbury and Bishop Joseph Butler, traces changes in Hume’s theory of meaning, and discusses the ontological and cosmological arguments and Hume’s treatment of the problem of evil. Yandell then considers other lesser known writings by Hume that are relevant to his philosophy of religion.