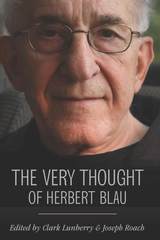 Herbert Blau (1926–2013) was the most influential theater theorist, practitioner, and educator of his generation. He was the leading American interpreter of the works of Samuel Beckett and as a director was instrumental in introducing works of the European avant-garde to American audiences. He was also one of the most far-reaching and thoughtful American theorists of theater and performance, and author of influential books such as The Dubious Spectacle, The Audience, and Take Up the Bodies: Theater at the Vanishing Point.