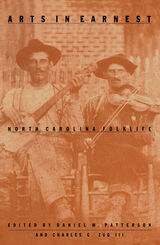 Arts in Earnest
North Carolina Folklife
Daniel W. Patterson and Charles G. Zugg, III, eds.
Duke University Press, 1990
Arts in Earnest explores the unique folklife of North Carolina from ruddy ducks to pranks in the mill. Traversing from Murphy to Manteo, these fifteen essays demonstrate the importance of North Carolina’s continually changing folklife. From decoy carving along the coast, to the music of tobacco chants and the blues of the Piedmont, to the Jack tales of the mountains, Arts in Earnest reflects the story of a people negotiating their rapidly changing social and economic environment.
Personal interviews are an important element in the book. Laura Lee, an elderly black woman from Chatham County, describes the quilts she made from funeral flower ribbons; witnesses and friends each remember varying details of the Duke University football player who single-handedly vanquished a gang of would-be muggers; Clyde Jones leads a safari through his backyard, which is filled with animals made of wood and cement that represent nontraditional folk art; the songs and sermon of a Primitive Baptist service flow together as one—“it tills you up all over”; Durham bluesman Willie Trice, one of a handful of Durham musicians who recorded in the 1930s and early 1940s, remembers when the active tobacco warehouses offered ready audiences—“They’d tip us a heap of change to play some music”; and Goldsboro tobacco auctioneer H. L. “Speed” Riggs chants 460 words per minute, five to six times faster than a normal conversational rate.
[more] 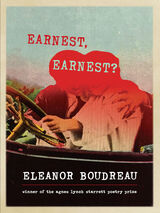 Earnest, Earnest?
Poems
Eleanor Boudreau
University of Pittsburgh Press, 2020
In Earnest, Earnest?, the speaker, Eleanor, writes postcards to her on-again-off-again lover, Earnest. The fact that her lover’s name is Earnest and that their relationship is fraught, raises questions of sincerity and irony, and whether both can be present at the same time. While Earnest can be read literally as Eleanor’s lover, he is best understood as another side of the poet’s self. The ambiguity at play in Earnest, Earnest? is embodied in the form of the “Earnest Postcards” that structure the book—these postcards are experimental in their use of images and formal in their dialogue with the sonnet. Thus, Earnest, Earnest? is a question of tone, address, and form.

from "You Marry a Man"

You marry a man and you think his blood is red.
Turns out it’s not, it’s purple.

This doesn’t matter, is not why you married him,
but you did—you thought his blood was red.

And he has never read Shakespeare, knows nothing
of the quality of mercy, but he reminds you every
day that you are not Shakespeare.

You know you’re not Shakespeare, Eleanor, he says.
[more]