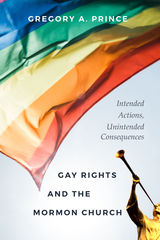 Gay Rights and the Mormon Church
Intended Actions, Unintended Consequences
Gregory A. Prince
University of Utah Press, 2019
The Mormon Church entered the public square on LGBT issues by joining forces with traditional-marriage proponents in Hawaii in 1993. Since then, the church has been a significant player in the ongoing saga of LGBT rights within the United States and at times has carried decisive political clout.

Gregory Prince draws from over 50,000 pages of public records, private documents, and interview transcripts to capture the past half-century of the Mormon Church’s attitudes on homosexuality. Initially that principally involved only its own members, but with its entry into the Hawaiian political arena, the church signaled an intent to shape the outcome of the marriage equality battle. That involvement reached a peak in 2008 during California’s fight over Proposition 8, which many came to call the “Mormon Proposition.”

In 2015, when the Supreme Court made marriage equality the law of the land, the Mormon Church turned its attention inward, declaring same-sex couples “apostates” and denying their children access to key Mormon rites of passage, including the blessing (christening) of infants and the baptism of children.

Prince's interview with the Press: https://conta.cc/2HHmeTm 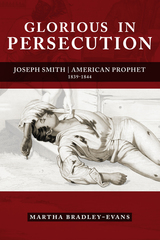 Escaping imprisonment in Missouri in 1839, the Mormon prophet Joseph Smith quickly settled with family and followers on the Illinois banks of the Mississippi River. Under Smith’s direction, the small village of Commerce soon mushroomed into the boomtown of Nauvoo, home to 12,000 and more members of the Church of Jesus Christ of Latter-day Saints.

For Smith, Nauvoo was the new epicenter of the Mormon universe: the gathering place for Latter-day Saints worldwide; the location of a modern-day Zion; the stage upon which his esoteric teachings, including plural marriage and secret temple ceremonies, played out; and the locus of a theocracy whose legal underpinnings would be condemned by outsiders as an attack on American pluralism.

In Nauvoo, Smith created a proto-utopian society built upon continuing revelation; established a civil government that blurred the lines among executive, legislative, and legal branches; introduced doctrines that promised glimpses of heaven on earth; centralized secular and spiritual authority in fiercely loyal groups of men and women; insulated himself against legal harassment through creative interpretations of Nauvoo’s founding charter; embarked upon a daring run at the U.S. presidency; and pursued a vendetta against dissidents that lead eventually to his violent death in 1844.

The common thread running through the final years of Smith’s tumultuous life, according to prize-winning historian and biographer, Martha Bradley-Evans, is his story of prophethood and persecution. Smith’s repeated battles with the forces of evil–past controversies transformed into mythic narratives of triumphant as well as present skirmishes with courts, politicians, and apostates–informed Smith’s construction of self and chronicle of innocent suffering.

“Joseph found religious and apocalyptic significance in every offense and persecution–actual or imagined,” writes Bradley-Evans, “and wove these slights into his prophet-narrative. Insults became badges of honor, confirmation that his life was playing out on a mythic stage of opposition. By the time Joseph led his people to Illinois, he had lived with the adulation of followers and the vilification of enemies for more than a decade. Joseph’s worst challenges often proved to be his greatest triumphs. He forged devotion through disaster, faith through depression. Joseph interpreted each new event as God’s will set against manifestations of evil opposed to the restoration of all things.”

Bradley-Evan’s ground-breaking portrait of Smith goes farther than any previous biography in explaining the Mormon prophet and the mystery of his appeal. 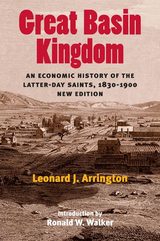 Great Basin Kingdom
An Economic History of the Latter-day Saints, 1830-1900, New Edition
Leonard J. Arrington
University of Illinois Press, 2004
Leonard Arrington, who died in 1999, is considered by most, if not all, serious scholars of Mormon and western history as the single most important figure to write on LDS history. Great Basin Kingdom is perhaps his greatest work.

A classic in Mormon studies and western history, Great Basin Kingdom offers insights into the ‘underdeveloped' American economy, a comprehensive treatment of one of the few native American religious movements, and detailed, exciting stories from little-known phases of Mormon and American history.

This edition includes thirty new photographs and an introduction by Ronald W. Walker that provides a brief biography of Arrington, as well as the history of the work, its place in Mormon and western historiography, and its lasting impact.