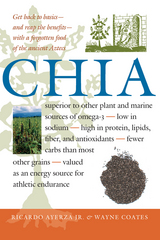 Chia
Rediscovering a Forgotten Crop of the Aztecs
Ricardo Ayerza Jr. and Wayne Coates
University of Arizona Press, 2005
One of the four main Aztec crops at the time of Columbus’s arrival in the New World, chia is now a forgotten food of the Americas. Chia seed oil offers the highest omega-3 fatty acid content available from plants, but today this species is known only for its use in "chia pets." Yet pre-Columbian civilizations used chia as a raw material for medicines and nutritional compounds, while chia flour could be stored for years as a food reserve and was valued as a source of energy on long journeys.

In this book, agronomist Ricardo Ayerza and agricultural engineer Wayne Coates trace the long and fascinating history of chia’s use, then reveal the scientific story of the plant and its modern potential. They compare fatty acid profiles of chia with our other major sources—fish oil, flaxseed, and marine algae—and provide evidence that chia is superior in many ways.

Here are just some of the benefits that chia provides:
- chia has the highest known percentage of alpha-linolenic acid, and the highest combined alpha-linolenic and linoleic fatty acid percentage of all crops
- chia has more protein, lipids, energy, and fiber—but fewer carbs—than rice, barley, oats, wheat, or corn—and its protein is gluten-free
- chia is an excellent source of calcium, phosphorus, magnesium, potassium, iron, zinc, and copper
- chia is low in sodium: salmon has 78 times as much, tuna 237 times as much
- chia exhibits no evidence of allergic response, even in individuals with peanut and tree-nut allergies
- chia doesn’t give off a “fishy flavor,” unlike some other sources of omega-3 fatty acid

The need to balance the essential fatty acid content of the human diet, combined with the need for a safe, renewable, omega-3 fatty acid source, positions chia to become one of the world’s important crops. As this insightful study shows, current nutritional understanding provides an excellent opportunity to reintroduce this important food to the world.
[more]