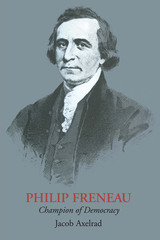 Philip Freneau
Champion of Democracy
By Jacob Axelrad
University of Texas Press, 1967
Philip Freneau was a poet, editor, and mariner. A graduate of Princeton, he was the roommate of James Madison and a classmate of Hugh Henry Brackenridge and Aaron Burr. When the colonies rebelled against England, he supported his newly born nation as a privateer, spending some time in a British prison as a result. He also served, more effectively, as “the poet of the Revolution.” Later he became the journalistic voice of the democrats. Ardently devoted to liberty, he believed himself to be a defender of the common man, for whom he fought selflessly and often vitriolicly throughout his life. In newspapers such as The Freeman’s Journal, The New York Daily Advertiser, The National Gazette, The Jersey Chronicle, and The Time-Piece, he published articles, letters, and poems, instructing the citizens of the new Republic about their rights, and attacking those who, he believed, were infringing on those rights. In the midst of the controversy in which he was so often involved, he also found time to write a small body of poetry whose sensitivity and beauty mark him as the poetic equal of his European contemporaries, and, in fact, as a precursor of the new Romantic movement. In Philip Freneau: Champion of Democracy Jacob Axelrad provides a detailed biography of this pensman of the Revolution and early Republic. He gives a sympathetic, imaginative, perceptive, yet objective interpretation of Freneau and his place in history, and at the same time he presents a delightfully readable and clear picture of the period during which the poet lived. These pages not only re-create the battles between Whig and Tory, federalist and democrat, but they also are alive with the activities and philosophies of the men who made American history. James Madison, Thomas Jefferson, Alexander Hamilton, George Washington, John Adams, James Monroe go about the business of creating and shaping a new country, and as they do, they move into and out of the life of the poet of Monmouth, influencing him in a variety of ways. Above all, Axelrad brings to life for the reader the man Freneau: simple, direct, often uncritical in his devotion to the cause he believed in; courageous in sustaining his stand against strong opposition; disillusioned and pessimistic about human nature, yet boldly optimistic about the future of humanity and of his country. And always behind the furor the reader is aware of the man struggling to provide a living for himself and his family, and never quite succeeding.
[more]