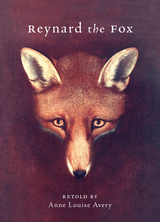 Reynard—a subversive, dashing, anarchic, aristocratic, witty fox from the watery lowlands of medieval East Flanders—is in trouble. He has been summoned to the court of King Noble the Lion, charged with all manner of crimes and misdemeanors. How will he pit his wits against his accusers—greedy Bruin the Bear, pretentious Courtoys the Hound, and dark and dangerous Isengrim the Wolf—to escape the gallows?

Reynard was once the most popular and beloved character in European folklore, as familiar as Robin Hood, King Arthur, or Cinderella. His character spoke eloquently for the voiceless and disenfranchised, but also amused and delighted the elite, capturing hearts and minds across borders and societal classes for centuries. Based on William Caxton’s bestselling 1481 English translation of the Middle Dutch, this edition is an imaginative retelling of the Reynard story, expanded with new interpretations and innovative language and characterizations. With its themes of protest, resistance, and duplicity led by a personable, anti-heroic Fox, this gripping tale is as relevant and controversial today as it was in the fifteenth century.