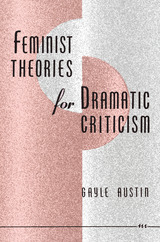 Feminist Theories for Dramatic Criticism provides a number of useful approaches for analyzing works for the stage from a feminist perspective. Each chapter outlines key feminist theories in a specific field, covering literary criticisms, anthropology, psychology, and film, and then applies these theories in a detailed criticism of one or two plays. Plays by Eugene O'Neill, Arthur Miller, Lillian Hellman, Jane Bowles, Sam Shepard, and Alice Childress—all produced after World War II—are reexamined through the lenses of feminist theorist Judith Fetterley, Gayle Rubin, Nancy Chodorow, and Laura Mulvey, each a key figure in her respective field.

The introduction provides a framework for the discussion of feminist dramatic criticism by presenting the multiple political perspectives within feminism. The contributions of black and lesbian feminists to the question of theory are explored, as are the evolutionary stages of feminist criticism as they have been occurring in other fields. Theater has been slower than most fields to move through these stages, and its trajectory thus far is briefly traced. For the sake of clarity, each of the central chapters treats theories from a particular discipline, but the conclusion reminds us that in practice the theories are most often combined.

The book will appeal to theater scholars and practitioners interested in finding their way into feminist theory for the first time, or in expanding their knowledge of its insights for use in teaching, research, and production. Those in women's studies and other fields will find it shows ways to include plays among the texts they analyze.