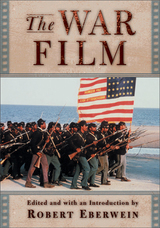 War has had a powerful impact on the film industry. But it is not only wars that affect films; films influence war-time behavior and incisively shape the way we think about the battles that have been waged.

In The War Film, Robert Eberwein brings together essays by scholars using a variety of critical approaches to explore this enduringly popular film genre. Contributors examine the narrative and aesthetic elements of war films from four perspectives: consideration of generic conventions in works such as All Quiet on the Western Front, Bataan, and The Thin Red Line; treatment of race in various war films, including Glory, Home of the Brave, Platoon,and Hamburger Hill; aspects of gender, masculinity and feminism in The Red Badge of Courage, Rambo, Dogfight, and Courage under Fire; and analysis of the impact of contemporary history on the production and reception of films such as The Life and Times of Rosie the Riveter, Saving Private Ryan, and We Were Soldiers.

Drawing attention to the dynamic interrelationships among politics, nationalism, history, gender, and film, this comprehensive anthology is bound to become a classroom favorite.