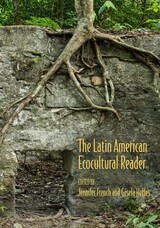 The Latin American Ecocultural Reader is a comprehensive anthology of literary and cultural texts about the natural world. The selections, drawn from throughout the Spanish-speaking countries and Brazil, span from the early colonial period to the present. Editors Jennifer French and Gisela Heffes present work by canonical figures, including José Martí, Bartolomé de las Casas, Rubén Darío, and Alfonsina Storni, in the context of our current state of environmental crisis, prompting new interpretations of their celebrated writings. They also present contemporary work that illuminates the marginalized environmental cultures of women, indigenous, and Afro-Latin American populations. Each selection is introduced with a short essay on the author and the salience of their work; the selections are arranged into eight parts, each of which begins with an introductory essay that speaks to the political, economic, and environmental history of the time and provides interpretative cues for the selections that follow.

The editors also include a general introduction with a concise overview of the field of ecocriticism as it has developed since the 1990s. They argue that various strands of environmental thought—recognizable today as extractivism, eco-feminism, Amerindian ontologies, and so forth—can be traced back through the centuries to the earliest colonial period, when Europeans first described the Americas as an edenic “New World” and appropriated the bodies of enslaved Indians and Africans to exploit its natural bounty.