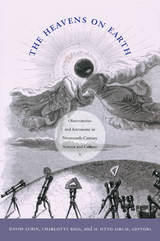 The Heavens on Earth
Observatories and Astronomy in Nineteenth-Century Science and Culture
David Aubin, Charlotte Bigg, and H. Otto Sibum, eds.
Duke University Press, 2010
The Heavens on Earth explores the place of the observatory in nineteenth-century science and culture. Astronomy was a core pursuit for observatories, but usually not the only one. It belonged to a larger group of “observatory sciences” that also included geodesy, meteorology, geomagnetism, and even parts of physics and statistics. These pursuits coexisted in the nineteenth-century observatory; this collection surveys them as a coherent whole. Broadening the focus beyond the solitary astronomer at his telescope, it illuminates the observatory’s importance to technological, military, political, and colonial undertakings, as well as in advancing and popularizing the mathematical, physical, and cosmological sciences.

The contributors examine “observatory techniques” developed and used not only in connection with observatories but also by instrument makers in their workshops, navy officers on ships, civil engineers in the field, and many others. These techniques included the calibration and coordination of precision instruments for making observations and taking measurements; methods of data acquisition and tabulation; and the production of maps, drawings, and photographs, as well as numerical, textual, and visual representations of the heavens and the earth. They also encompassed the social management of personnel within observatories, the coordination of international scientific collaborations, and interactions with dignitaries and the public. The state observatory occupied a particularly privileged place in the life of the city. With their imposing architecture and ancient traditions, state observatories served representative purposes for their patrons, whether as symbols of a monarch’s enlightened power, a nation’s industrial and scientific excellence, or republican progressive values. Focusing on observatory techniques in settings from Berlin, London, Paris, and Rome to Australia, Russia, Thailand, and the United States, The Heavens on Earth is a major contribution to the history of science.