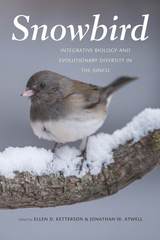 Snowbird
Integrative Biology and Evolutionary Diversity in the Junco
Edited by Ellen D. Ketterson and Jonathan W. Atwell
University of Chicago Press, 2016
At birdfeeders and in backyards across North America, the dark-eyed junco, or snowbird, can be found foraging for its next meal. With an estimated population of at least 630 million, juncos inhabit forests, parks, and even suburban habitats, making them one of the continent’s most abundant and easily observable songbirds. But while common and widespread, juncos also exhibit extraordinary diversity in color, shape, size, and behavior across their range, making them ideal study subjects for biologists interested in ecology and evolutionary diversification.

Intended for scholars, citizen scientists, and amateur ornithologists, alike, Snowbird synthesizes decades of research from the diverse and talented researchers who study the Junco genus. Though contributors approach their subject from a variety of perspectives, they share a common goal: elucidating the organismal and evolutionary processes by which animals adapt and diversify in response to environmental change. Placing special emphasis on the important role that underlying physiological, hormonal, and behavioral mechanisms play in these processes, Snowbird not only provides a definitive exploration of the junco’s evolutionary history and behavioral and physiological diversity but also underscores the junco’s continued importance as a model organism in a time of rapid global climate change. By merging often disparate biological fields, Snowbird offers biologists across disciplines an integrative framework for further research into adaptation, population divergence, and the formation of new species.
[more]