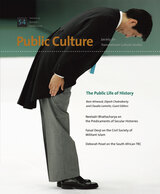 The Public Life of History, Volume 20
Bain Attwood, Dipesh Chakrabarty, and Claudio Lomnitz, eds.
Duke University Press
This special issue of Public Culture explores the tension and the challenges raised by the interaction of history with the domains of public life, including politics, the law, and the media. It focuses specifically on situations where a social compact has been reshaped based on the revaluation of historical wounds such as those inflicted in South African apartheid and in the Holocaust. The politics of recognition has challenged historical research to serve public ends, invoking the past as the site of the original slight and calling for redress in the present.

Gathering scholars involved in prominent debates regarding the shifting expectations of the rule of history, this special issue is a sustained engagement with historical experience, public discussion, and historical truth in a variety of global sites. One article considers what happens to the ideal of truth telling when truth commissions attempt to authenticate a complex mix of history and memory that is not always historically verifiable. Another article asks if history can continue to play an adjudicatory role in contemporary democracies when matters relating to the past are disputed in public life, as they are in India where the claims of scientific history are pitted against the culture-based history of Hindus. Still another contributor delves into the concept of “stolen generations” to explore the way indigenous people in Australia have laid claims in the present based on a historical wound.