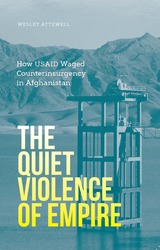 How the U.S. empire-state transformed post-1945 Afghanistan into a key site for reimagining development

Established in 1961 by President Kennedy, the United States Agency for International Development (USAID) is often viewed as an extension of the security state, playing a constant role on the ground in Afghanistan since the early sixties. The Quiet Violence of Empire traces USAID’s long and bloody history of development work in the region, revealing an empirically rich account of the transnational entanglements of imperialism and racial capitalism.

Wesley Attewell carefully analyzes three chronological moments of development as counterinsurgency in action: the Helmand Valley Project, the Soviet–Afghan conflict, and the post-9/11 occupation in Afghanistan. These case studies expose how USAID’s very public commitment to bringing seemingly inclusionary forms of self-help, technical assistance, and market development to Afghanistan has been undergirded by longer-standing infrastructures of race war and racial management. Attewell exposes how one of the net effects of USAID’s development mission to Afghanistan has been to constrain the life chances of Afghan beneficiaries while simultaneously diverting development capital back to U.S. contractors, deftly underscoring the notion of development as a form of slow violence.

The Quiet Violence of Empire asks the critical question: how might we refuse the ruse of USAID and its endlessly deferred promise of development? Thinking relationally across the fields of human geography, global studies, and critical ethnic studies, it uncovers the explicitly racial underpinnings of international development theory and praxis.