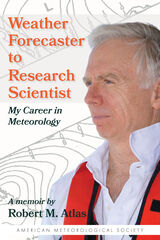 As a young child, Robert M. Atlas would often look up at the sky, observe the clouds, and ask his parents questions about the weather. That early interest sparked a career in meteorology that took place during a period of rapid development in the field. Weather Forecaster to Research Scientist follows his decades-long career and his innovative research, which led to improvements in the understanding and prediction of extreme weather.

Atlas’s journey begins with his start as an apprentice forecaster for the US Weather Bureau during a time when satellite meteorology and operational numerical weather prediction were just in their infancy. Weather Forecaster to Research Scientist also traces his experiences as an operational forecaster in the US Air Force, discusses his pioneering work on ocean surface winds using satellites, and describes his leadership of scientific organizations within NASA and NOAA as well as his experiences teaching at several universities. An engaging account of a distinguished career, this book will appeal to students, educators, weather forecasters, scientists, and weather enthusiasts alike.
[more]