The Book of Apollonius
Translated by Raymond L. Grismer and Elizabeth Atkins
University of Minnesota Press, 1936

The Book of Apollonius was first published in 1936. Minnesota Archive Editions uses digital technology to make long-unavailable books once again accessible, and are published unaltered from the original University of Minnesota Press editions.

No other English translation of this famous thirteenth-century Spanish narrative poem is available, in either poetry or prose. The present translators have put it into a form that reproduces most faithfully the quaint and naïve quality of the original Libro de Apolonio, the story of which appears in Book Eight of John Gower's Confessio Amantis and in Shakespeare's Pericles.

The reader who is not a specialist in medieval or Spanish literature will find here a lush uncensored tale of mad adventure. If he will give himself up to the spell of its child-like spirit, he will find himself led on through such "faery lands forlorn" as the untrammeled imagination has immemorially loved to create. The story parades before him storms, shipwrecks, kidnappings, pirates, supposed deaths, miraculous escapes and survivals. Beginning in a theme that runs through dramatic literature from Oedipus Rex through The Cenci to The Barretts of Wimpole Street,the plot reveals the misfortunes that furiously pursue Apollonius, king of Tyre, after he tries to woo the daughter of King Antiochus away from her father. Forced to flee for his life, Apollonius plunges from adventure to adventure, until incredible reunions and transports of joy bring the tale to a conventional happy ending.

The translators' Introduction gives an account of the use of the Apollonius material in Old French, Provençal, Anglo-Saxon, German, and other literatures, as well as tracing the history of the poem from its source in a lost Greek romance. 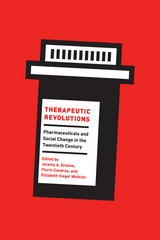 Therapeutic Revolutions
Pharmaceuticals and Social Change in the Twentieth Century
Edited by Jeremy A. Greene, Flurin Condrau, and Elizabeth Siegel Watkins
University of Chicago Press, 2016
When asked to compare the practice of medicine today to that of a hundred years ago, most people will respond with a story of therapeutic revolution: Back then we had few effective remedies, but now we have more (and more powerful) tools to fight disease, from antibiotics to psychotropics to steroids to anticancer agents.

This collection challenges the historical accuracy of this revolutionary narrative and offers instead a more nuanced account of the process of therapeutic innovation and the relationships between the development of medicines and social change. These assembled histories and ethnographies span three continents and use the lived experiences of physicians and patients, consumers and providers, and marketers and regulators to reveal the tensions between universal claims of therapeutic knowledge and the actual ways these claims have been used and understood in specific sites, from postwar West Germany pharmacies to twenty-first century Nigerian street markets. By asking us to rethink a story we thought we knew, Therapeutic Revolutions offers invaluable insights to historians, anthropologists, and social scientists of medicine.
[more]