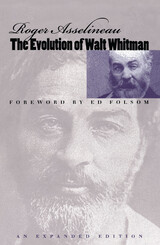 Now, nearly forty years after its original translation into English, Roger Asselineau's complete and magisterial biography of Walt Whitman will remind readers of the complex weave of traditions in Whitman scholarship. It is startling to recognize how much of our current understanding of Whitman was already articulated by Asselineau nearly half a century ago. Throughout its eight hundred pages, The Evolution of Walt Whitman speaks with authority on a vast range of topics that define both Whitman the man and Whitman the mythical personage. Remarkably, most of these discussions remain fresh and relevant, and that is in part because they have been so influential.

In particular, The Evolution of Walt Whitman inaugurated the study of Leaves of Grass as a lifelong work in progress, and it marked the end of the habit of talking about Leaves as if it were a single unified book. Asselineau saw Whitman's poetry “not as a body of static data but as a constantly changing continuum whose evolution must be carefully observed.” Throughout Evolution, Asselineau placed himself in the role of the observer, analyzing Whitman's development with a kind of scientific detachment. But behind this objective persona burned the soul of a risk taker who was willing to rewrite Whitman studies by bravely proposing what was then a controversial biographical source for Whitman's art—his homosexual desires.

The Evolution of Walt Whitman is a reminder that extraordinary works of criticism never exist in and of themselves. In this expanded edition, Roger Asselineau has provided a new essay summarizing his own continuing journey with Whitman. A foreword by Ed Folsom, editor of the Walt Whitman Quarterly, regards Evolution as the genesis of contemporary Whitman studies.