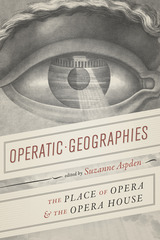 Operatic Geographies
The Place of Opera and the Opera House
Edited by Suzanne Aspden
University of Chicago Press, 2019
Since its origin, opera has been identified with the performance and negotiation of power. Once theaters specifically for opera were established, that connection was expressed in the design and situation of the buildings themselves, as much as through the content of operatic works. Yet the importance of the opera house’s physical situation, and the ways in which opera and the opera house have shaped each other, have seldom been treated as topics worthy of examination.

Operatic Geographies invites us to reconsider the opera house’s spatial production. Looking at opera through the lens of cultural geography, this anthology rethinks the opera house’s landscape, not as a static backdrop, but as an expression of territoriality. The essays in this anthology consider moments across the history of the genre, and across a range of geographical contexts—from the urban to the suburban to the rural, and from the “Old” world to the “New.” One of the book’s most novel approaches is to consider interactions between opera and its environments—that is, both in the domain of the traditional opera house and in less visible, more peripheral spaces, from girls’ schools in late seventeenth-century England, to the temporary arrangements of touring operatic troupes in nineteenth-century Calcutta, to rural, open-air theaters in early twentieth-century France. The essays throughout Operatic Geographies powerfully illustrate how opera’s spatial production informs the historical development of its social, cultural, and political functions.
[more]