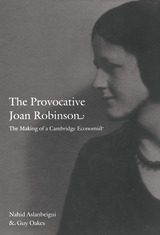 The Provocative Joan Robinson
The Making of a Cambridge Economist
Nahid Aslanbeigui and Guy Oakes
Duke University Press, 2009
One of the most original and prolific economists of the twentieth century, Joan Robinson (1903–83) is widely regarded as the most important woman in the history of economic thought. Robinson studied economics at Cambridge University, where she made a career that lasted some fifty years. She was an unlikely candidate for success at Cambridge. A young woman in 1930 in a university dominated by men, she succeeded despite not having a remarkable academic record, a college fellowship, significant publications, or a powerful patron. In The Provocative Joan Robinson, Nahid Aslanbeigui and Guy Oakes trace the strategies and tactics Robinson used to create her professional identity as a Cambridge economist in the 1930s, examining how she recruited mentors and advocates, carefully defined her objectives, and deftly pursued and exploited opportunities.

Aslanbeigui and Oakes demonstrate that Robinson’s professional identity was thoroughly embedded in a local scientific culture in which the Cambridge economists A. C. Pigou, John Maynard Keynes, Dennis Robertson, Piero Sraffa, Richard Kahn (Robinson’s closest friend on the Cambridge faculty), and her husband Austin Robinson were important figures. Although the economists Joan Robinson most admired—Pigou, Keynes, and their mentor Alfred Marshall—had discovered ideas of singular greatness, she was convinced that each had failed to grasp the essential theoretical significance of his own work. She made it her mission to recast their work both to illuminate their major contributions and to redefine a Cambridge tradition of economic thought. Based on the extensive correspondence of Robinson and her colleagues, The Provocative Joan Robinson is the story of a remarkable woman, the intellectual and social world of a legendary group of economists, and the interplay between ideas, ambitions, and disciplinary communities.