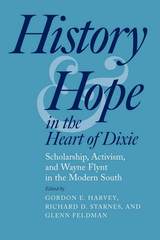 History and Hope in the Heart of Dixie
Scholarship, Activism, and Wayne Flynt in the Modern South
Edited by Gordon E. Harvey, Richard D. Starnes and Glenn Feldman
University of Alabama Press, 2006
Social and political history of the modern South.
This collection of essays on the social and political history of the modern South consider the region’s poor, racial mores and race relations, economic opportunity, Protestant activism, political coalitions and interest groups, social justice, and progressive reform.
History and Hope in the Heart of Dixie illuminates the dual role of historian and public advocate in modern America. In a time when the nation’s eyes have been focused by Hurricanes Katrina and Rita onto the vulnerability and dire condition of poor people in the South, the applicability of research, teaching, and activism for this voiceless element seems all the more relevant.
Responding to the example of Wayne Flynt, whose fierce devotion to his state of Alabama and its region has not blinded his recognition of the inequities and despair that define southern life for so many, the scholars assembled in this work present contributions to the themes Flynt so passionately explored in his own work. Two seasoned observers of southern history and culture—John Shelton Reed and Dan T. Carter—offer assessments of Flynt’s influence on the history profession as a whole and on the region of the South in particular.
[more]