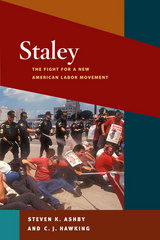 This on-the-ground labor history focuses on the bitterly contested labor conflict in the early 1990s at the A. E. Staley corn processing plant in Decatur, Illinois, where workers waged one of the most hard-fought struggles in recent labor history. Originally family-owned, A. E. Staley was bought out by the multinational conglomerate Tate & Lyle, which immediately launched a full-scale assault on its union workforce. Allied Industrial Workers Local 837 responded by educating and mobilizing its members, organizing strong support from the religious and black communities, building a national and international solidarity movement, and engaging in nonviolent civil disobedience at the plant gates.

Drawing on seventy-five interviews, videotapes of every union meeting, and their own active involvement organizing with the Staley workers, Steven K. Ashby and C. J. Hawking bring the workers' voices to the fore and reveal their innovative tactics, such as work-to-rule and solidarity committees, that inform and strengthen today's labor movement.