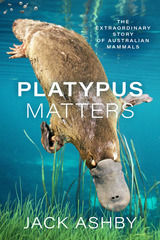 Think of a platypus: They lay eggs (that hatch into so-called platypups), produce milk without nipples and venom without fangs, and can detect electricity. Or a wombat: Their teeth never stop growing, they poop cubes, and they defend themselves with reinforced rears. And what about antechinuses—tiny marsupial carnivores whose males don’t see their first birthday, as their frenzied sex lives take so much energy that their immune systems fail? Platypuses, possums, wombats, echidnas, devils, kangaroos, quolls, dibblers, dunnarts, kowaris: Australia has some truly astonishing mammals, with incredible, unfamiliar features. But how does the world regard these creatures? And what does that mean for their conservation?

In Platypus Matters, naturalist Jack Ashby shares his love for these often-misunderstood animals. Informed by his own experiences meeting living marsupials and egg-laying mammals during fieldwork in Tasmania and mainland Australia, as well as his work with thousands of zoological specimens collected for museums over the last two-hundred-plus years, Ashby’s tale not only explains historical mysteries and debunks myths (especially about the platypus), but also reveals the toll these myths can take. Ashby makes clear that calling these animals “weird” or “primitive”—or incorrectly implying that Australia is an “evolutionary backwater,” a perception that can be traced back to the country’s colonial history—has undermined conservation: Australia now has the worst mammal extinction rate of any place on Earth. Important, timely, and written with humor and wisdom by a scientist and self-described platypus nerd, this celebration of Australian wildlife will open eyes and change minds about how we contemplate and interact with the natural world—everywhere.
[more]