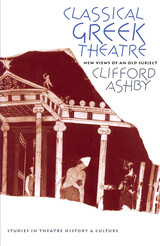 Many dogmas regarding Greek theatre were established by researchers who lacked experience in the mounting of theatrical productions. In his wide-ranging and provocative study, Clifford Ashby, a theatre historian trained in the practical processes of play production as well as the methods of historical research, takes advantage of his understanding of technical elements to approach his ancient subject from a new perspective. In doing so he challenges many long-held views.

Archaeological and written sources relating to Greek classical theatre are diverse, scattered, and disconnected. Ashby's own (and memorable) fieldwork led him to more than one hundred theatre sites in Greece, southern Italy, Sicily, and Albania and as far into modern Turkey as Hellenic civilization had penetrated. From this extensive research, he draws a number of novel revisionist conclusions on the nature of classical theatre architecture and production.

The original orchestra shape, for example, was a rectangle or trapezoid rather than a circle. The altar sat along the edge of the orchestra, not at its middle. The scene house was originally designed for a performance event that did not use an up center door. The crane and ekkyklema were simple devices, while the periaktoi probably did not exist before the Renaissance. Greek theatres were not built with attention to Vitruvius' injunction against a southern orientation and were probably sun-sited on the basis of seasonal touring. The Greeks arrived at the theatre around mid-morning, not in the cold light of dawn. Only the three-actor rule emerges from this eclectic examination somewhat intact, but with the division of roles reconsidered upon the basis of the actors' performance needs. Ashby also proposes methods that can be employed in future studies of Greek theatre. Final chapters examine the three-actor production of Ion, how one should not approach theatre history, and a shining example of how one should.

Ashby's lengthy hands-on training and his knowledge of theatre history provide a broad understanding of the ways that theatre has operated through the ages as well as an ability to extrapolate from production techniques of other times and places.

The American tent show, which flourished for over four decades, represents a brief but important phase of theatre. Harley Sadler played a significant role in the history of the "rag opries."