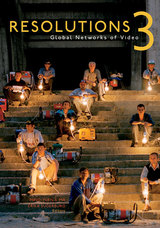 Resolutions 3 explores the wide-ranging implications of video art and video-based production in contemporary media culture. It is the third volume in a series composed of Resolution: A Critique of Video Art (1986) and Resolutions: Contemporary Video Practices (1996). While Resolution was one of the first critical texts on video art in the United States, Resolutions was one of the first books to address video as a medium across disciplines from theoretical, activist, and transnational perspectives.

Resolutions 3 articulates this legacy as a challenge to reengage with the explosive viral reach of moving image–based content and its infiltration into and impact on culture and everyday life. The contributors to this work analyze what is now a fourth decade of video practices as marked within and outside the margins of art production, networked interventions, projected spectacle, museum entombment, or 24/7 streaming. Intending to broaden, contest, and amplify the mediated space that was defined by its two predecessors, this volume investigates the ever-changing state of video’s deployment as examiner, tool, journal reportage, improvisation, witness, riff, leverage, and document.