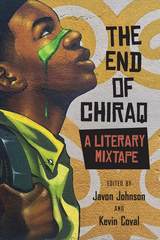 The End of Chiraq
A Literary Mixtape
Edited by Javon Johnson and Kevin Coval
Northwestern University Press, 2018
The End of Chiraq: A Literary Mixtape is a collection of poems, rap lyrics, short stories, essays, interviews, and artwork about Chicago, the city that came to be known as "Chiraq" ("Chicago" + "Iraq"), and the people who live in its vibrant and occasionally violent neighborhoods. Tuned to the work of Chicago’s youth, especially the emerging artists and activists surrounding Young Chicago Authors, this literary mixtape unpacks the meanings of “Chiraq” as both a vexed term and a space of possibility.

"Chiraq" has come to connote the violence—interpersonal and structural—that many Chicago youth regularly experience. But the contributors to The End of Chiraq show that Chicago is much more than Chiraq. Instead, they demonstrate how young people are thinking and mobilizing, engaged in a process of creating a new and safer world for themselves, their communities, and their city.

In true mixtape fashion, the book is an exercise in "low end theory" that does not just include so-called underground and marginal voices, but foregrounds them. Edited by award-winning poets, writers, and teachers Javon Johnson and Kevin Coval, The End of Chiraq addresses head-on the troublesome relationship between Chicago and Chiraq and envisions a future in which both might be transformed.
[more]