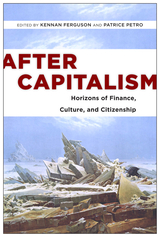 After Capitalism
Horizons of Finance, Culture, and Citizenship
Ferguson, Kennan
Rutgers University Press, 2016
From Thomas Piketty to David Harvey, scholars are increasingly questioning whether we are entering into a post-capitalist era. If so, does this new epoch signal the failure of capitalism and emergence of alternative systems? Or does it mark the ultimate triumph of capitalism as it evolves into an unstoppable entity that takes new forms as it engulfs its opposition?
After Capitalism brings together leading scholars from across the academy to offer competing perspectives on capitalism’s past incarnations, present conditions, and possible futures.  Some contributors reassess classic theorizations of capitalism in light of recent trends, including real estate bubbles, debt relief protests, and the rise of a global creditocracy. Others examine Marx’s writings, unemployment, hoarding, “capitalist realism,” and coyote (trickster) capitalism, among many other topics. Media and design trends locate the key ideologies of the current economic moment, with authors considering everything from the austerity aesthetics of reality TV to the seductive smoothness of liquid crystal.
Even as it draws momentous conclusions about global economic phenomena, After Capitalism also pays close attention to locales as varied as Cuba, India, and Latvia, examining the very different ways that economic conditions have affected the relationship between the state and its citizens. Collectively, these essays raise provocative questions about how we should imagine capitalism in the twenty-first century. Will capitalism, like all economic systems, come to an end, or does there exist in history or elsewhere a hidden world that is already post-capitalist, offering alternative possibilities for thought and action?
[more]