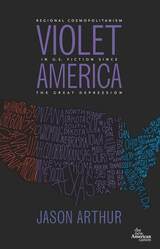 Violet America
Regional Cosmopolitanism in U.S. Fiction
Jason Arthur
University of Iowa Press, 2013
Violet America takes on the long habit among literary historians and critics of thinking about large segments of American literary production in terms of regionalism. Jason Arthur argues that classifying broad swaths of American literature as regionalist or “local color” writing brings with it a set of assumptions, informed by longstanding habits of thought about American culture, that marginalize important literary works and deform our understanding of them. Moreover, these assumptions reinforce our ideas about the divisions between city and country, coast and center, cosmopolitan and provincial that lie behind not only our literature, but our politics.

Against this common view, Violet America demonstrates just how cosmopolitan the regional impulse can be. In the works of James Agee, Jack Kerouac, Maxine Hong Kingston, Russell Banks, and Jonathan Franzen, the regional impulse yields narratives about the interdependence between privilege and poverty, mainstream and margin, urban and rural. These narratives counteract the polarizing cultural lens that, when unquestioned, sees the red-state/blue-state geography of twenty-first-century America as natural. Tracking the evolution of this impulse to depolarize, Violet America develops a literary history of “regional cosmopolitanism,” a key urge of which is to represent the interconnectedness of the local, the national, and the global. Writers incorporating this perspective redress the blight of America’s neglected places and peoples without also falling victim to the stigmas of being purely regional in their scope and interest. Rather than simply celebrating regional difference, the regional cosmopolitan fiction that Arthur discusses blends the nation’s cultural polarities into a connected, interdependent America.
[more]