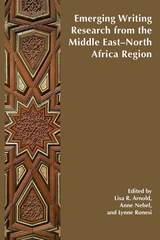 While events in the Middle East-North Africa region dominate world news, it is an area little understood by the rest of the world—not only historically, politically, and culturally but also within the discipline of Rhetoric and Composition and Second Language Writing. The editors and contributors to this collection share scholarship that addresses how writing programs and writing-across-the-curriculum initiatives—in the region and outside of it—are responding to the increasing globalization of higher education and contributing to international discussions about World Englishes and other language varieties as well as translingual approaches to writing and writing pedagogy.