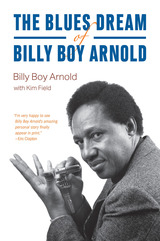 Simply put, Billy Boy Arnold is one of the last men standing from the Chicago blues scene’s raucous heyday. What’s more, unlike most artists in this electrifying melting pot, who were Southern transplants, Arnold—a harmonica master who shared stages with Bo Diddley, Muddy Waters, and Howlin’ Wolf, plus a singer and hitmaker in his own right who first recorded the standards “I Wish You Would” and “I Ain’t Got You”—was born right here and has lived nowhere else. This makes his perspective on Chicago blues, its players, and its locales all the rarer and all the more valuable. Arnold has witnessed musical generations come and go, from the decline of prewar country blues to the birth of the electric blues and the worldwide spread of rock and roll. Working here in collaboration with writer and fellow musician Kim Field, he gets it all down. The Blues Dream of Billy Boy Arnold is a remarkably clear-eyed testament to more than eighty years of musical love and creation, from Arnold’s adolescent quest to locate the legendary Sonny Boy Williamson, the story of how he named Bo Diddley Bo Diddley, and the ups and downs of his seven-decade recording career. Arnold’s tale—candidly told with humor, insight, and grit—is one that no fan of modern American music can afford to miss.