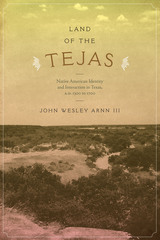 Land of the Tejas
Native American Identity and Interaction in Texas, A.D. 1300 to 1700
By John Wesley Arnn III
University of Texas Press, 2012

Drawing heavily on a detailed analysis of Toyah (a Late Prehistoric II material culture), as well as early European documentary records, an investigation of the regional environment, and comparisons of these data with similar regions around the world, Land of the Tejas examines a full scope of previously overlooked details. From the enigmatic Jumano Indian leader Juan Sabata to Spanish friar Casanas's 1691 account of the vast Native American Tejas alliance, Arnn's study shines new light on Texas's poorly understood past and debunks long-held misconceptions of prehistory and history while proposing a provocative new approach to the process by which we attempt to reconstruct the history of humanity.