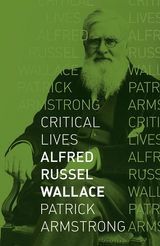 Alfred Russel Wallace
Patrick Armstrong
Reaktion Books, 2019
Sometimes referred to as the “Father of Biogeography,” Alfred Russel Wallace has come to be known as the co-originator of the theory of evolution through natural selection, and he also wrote extensively on zoology, botany, anthropology, politics, astronomy, and psychology. Although notorious in his day for his unpopular and eccentric beliefs, he is still recognized as one of the leading figures in nineteenth-century British science.

In this book, Patrick Armstrong illuminates the many facets of Wallace’s long life, which extended from 1823 until the eve of World War I. He shows Wallace to be, in many ways, a more interesting character than his colleague and friend, evolutionary scientist Charles Darwin. Taking a psychological approach, this compact yet comprehensive biography gives insight into a man who was frequently plagued with misfortune; legal problems, inability to obtain full-time employment, and relationship troubles all vexed him. Armstrong unlocks the life of a restless traveler who, although raised with “a very ordinary” education, would go on to become one of the most influential, extraordinary scientists of his time.
[more]