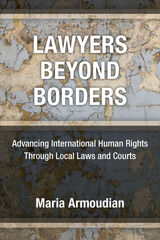 Despite international conventions and human rights declarations, millions of people have suffered and continue to suffer torture, slavery, or violent deaths, with no remedy or recourse. They have fallen, in essence, “below the law,” outside of law’s protection. Often violated by their own governments, sometimes with support from transnational corporations, or nations benefiting from human rights violations, how can these victims find justice?  Lawyers Beyond Borders reveals the inner workings of the advances and retreats in the quest for redress and restoration of human rights for those whom international legal-political systems have failed. The process of justice begins in the US, with a handful of human rights lawyers steeped in the American tradition of advancing civil rights through civil litigation. As the civil rights movement gained traction and an ample supply of lawyers, this small cadre turned their attention toward advancing international human rights, via the US legal system. They sought to build another piece of the rights revolution, this time for survivors of egregious human rights violations in faraway lands. These cases were among the most unlikely to be slated for victory: The abuses occurred abroad; the victims are aliens, usually with few, if any, resources; the perpetrators are politically powerful, resourced, and well connected, often members of governments, militaries, or multinational corporations. The legal and political systems’ structures are mostly stacked against these survivors, many who bear the scars of trauma and terror.

Lawyers Beyond Borders is about agency. It is about how, in the face of powerful interests and seemingly insurmountable obstacles—political, psychological, economic, geographical, and physical—a small group of lawyers and survivors navigated a terrain of daunting barriers to begin building, case-by-case, new pathways to justice for those who otherwise would have none.