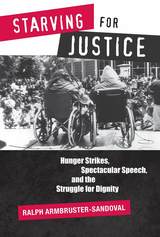 In the 1990s three college campuses in California exploded as Chicano/a and Latino/a students went on hunger strikes. Through courageous self-sacrifice, these students risked their lives to challenge racial neoliberalism, budget cuts, and fee increases. The strikers acted and spoke spectacularly and, despite great odds, produced substantive change.

Social movement scholars have raised the question of why some people risk their lives to create a better world. In Starving for Justice, Ralph Armbruster-Sandoval uses interviews and archival material to examine people’s willingness to make the extreme sacrifice and give their lives in order to create a more just society.

Popular memory and scholarly discourse around social movements have long acknowledged the actions of student groups during the 1960s. Now Armbruster-Sandoval extends our understanding of social justice and activism, providing one of the first examinations of Chicana/o and Latina/o student activism in the 1990s.

Students at University of California, Los Angeles; University of California, Santa Barbara; and Stanford University went on hunger strikes to demand the establishment and expansion of Chicana/o studies departments. They also had even broader aspirations—to obtain dignity and justice for all people. These students spoke eloquently, making their bodies and concerns visible. They challenged anti-immigrant politics. They scrutinized the rapid growth of the prison-industrial complex, racial and class polarization, and the university’s neoliberalization. Though they did not fully succeed in having all their demands met, they helped generate long-lasting social change on their respective campuses, making those learning institutions more just.