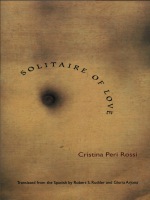 Solitaire of Love
Cristina Peri Rossi
Duke University Press, 2000
Solitaire of Love, an achingly lyrical novel by internationally acclaimed Latin American writer Cristina Peri Rossi, explores the sense of emotional exile that sexual passion can evoke. Only the fourth book of Peri Rossi’s to be translated into English—the others are The Ship of Fools, A Forbidden Passion, and Dostoevsky’s Last Night—Solitaire of Love showcases the mesmerizingly rhythmic language that has become the trademark of this award-winning and prolific author of novels, essay collections, poetry, and short stories.
Tracing the course of a relationship as it evolves into uncompromising self-destruction, the narrator of Solitaire of Love becomes addicted to his own passion and to the body of his beloved. Erotic, romantic love becomes bewitchment, producing a heightened state where time is measured in the rhythms of a chosen body and pride becomes subservient to obsession. The specifics of this other body trump any claim to ordinary existence for the narrator, as sex becomes a kind of idolatrous slavery and love becomes a mechanism for self-immolation. As in Peri Rossi’s other works, an ambiguous sense of gender and sexuality arise from her uniquely experimental prose and mystically erotic logic. Language is subsumed into this process as a way to bear witness, to transfix and capture the love object. The limbo of obsession, as described by Peri Rossi, creates an infantilizing brand of loneliness, broken by flashes of joy, insight, fury, and fear.
This novel was originally published in Spanish in 1988.
[more]