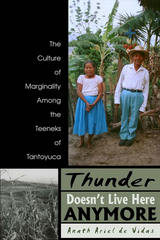 Thunder Doesn't Live Here Anymore
The Culture of Marginality Among the Teeneks of Tantoyuca
Anath Ariel de Vidas
University Press of Colorado, 2004
Now available in English, Thunder Doesn't Live Here Anymore explores the highly unusual worldview of the Teenek people of Tantoyuca, Veracruz, whose self-deprecating cosmology diverges quite radically from patterns of positive cultural identity among other indigenous groups in Mexico. The Teeneks speak of themselves as dirty, dumb, ignorant, and fearful, a vocabulary that serves to justify the Teeneks' condition of social and spatial marginality in relation to their mestizo neighbors.

However, as Anath Ariel de Vidas argues in this masterful ethnography, this self-denigration - added to the absence among the Teeneks of emblematic Indian features such as traditional costumes, agricultural rituals, specific ceremonies, or systems of religious cargos or offices - are not synonymous with collective anomie. Rather, as Ariel de Vidas demonstrates, their seeming ontological acceptance of a marginal social and economic condition is - in its own peculiar way - a language of indigenous resistance.