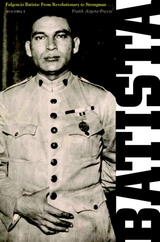 Pawn of the U.S. government. Right-hand man to the mob. Iron-fisted dictator. For decades, public understanding of the pre-Revolutionary Cuban dictator Fulgencio Batista has been limited to these stereotypes. While on some level they all contain an element of truth, these superficial characterizations barely scratch the surface of the complex and compelling career of this important political figure.

Second only to Fidel Castro, Batista is the most controversial leader in modern Cuban history. And yet, until now, there has been no objective biography written about him. Existing biographical literature is predominantly polemical and either borders on hero worship or launches a series of attacks aimed at denigrating his entire legacy.

In this book, the first of two volumes, Frank Argote-Freyre provides a full and balanced portrait of this historically shadowed figure. He describes Batista's rise to power as part of a revolutionary movement and the intrigues and dangers that surrounded him. Drawing on an extensive review of Cuban newspapers, government records, memos, oral history interviews, and a selection of Batista's personal documents, Argote-Freyre moves beyond simplistic caricatures to uncover the real man-one with strengths and weaknesses and with a career marked by accomplishments as well as failures.

This volume focuses on Batista's role as a revolutionary leader from 1933 to 1934 and his image as a "strongman" in the years between 1934 and 1939. Argote-Freyre also uses Batista as an interpretive prism to review an entire era that is usually ignored by scholars-the Republican period of Cuban history. Bringing together global and local events, he considers the significance and relationship of the worldwide economic depression, the beginnings of World War II, and in Cuba, the Revolution of 1933, the expansion of the middle class, and the gradual development of democratic institutions.

Fulgencio Batista and most of Cuba's past prior to the Revolution of 1959 has been lost in the historical mists. Cuba had a rich and fascinating history before the Marxist Revolution and the reign of Fidel Castro. This captivating and long-overdue book uncovers it.