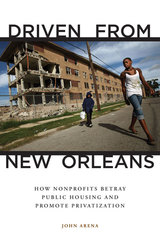 In the early 1980s the tenant leaders of the New Orleans St. Thomas public housing development and their activist allies were militant, uncompromising defenders of the city’s public housing communities. Yet ten years later these same leaders became actively involved in a planning effort to privatize and downsize their community—an effort that would drastically reduce the number of affordable apartments. What happened? John Arena—a longtime community and labor activist in New Orleans—explores this drastic change in Driven from New Orleans, exposing the social disaster visited on the city’s black urban poor long before the natural disaster of Katrina magnified their plight.

Arena argues that the key to understanding New Orleans’s public housing transformation from public to private is the co-optation of grassroots activists into a government and foundation-funded nonprofit complex. He shows how the nonprofit model created new political allegiances and financial benefits for activists, moving them into a strategy of insider negotiations that put the profit-making agenda of real estate interests above the material needs of black public housing residents. In their turn, white developers and the city’s black political elite embraced this newfound political “realism” because it legitimized the regressive policies of removing poor people and massively downsizing public housing, all in the guise of creating a new racially integrated, “mixed-income” community.

In tracing how this shift occurred, Driven from New Orleans reveals the true nature, and the true cost, of reforms promoted by an alliance of a neoliberal government, nonprofits, community activists, and powerful real estate interests. 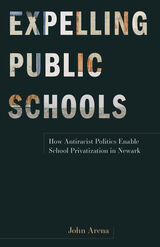 In Expelling Public Schools, John Arena explores the more than two-decade struggle to privatize public schools in Newark, New Jersey—a conflict that is raging in cities across the country—from the vantage point of elites advancing the pro-privatization agenda and their grassroots challengers.