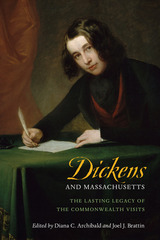 Dickens and Massachusetts
The Lasting Legacy of the Commonwealth Visits
Diana C. Archibald
University of Massachusetts Press, 2015
Charles Dickens traveled to North America twice, in 1842 and twenty-five years later in 1867–68, and on both trips Massachusetts was part of his itinerary. Although many aspects of his U.S. travels disappointed him, Massachusetts was the one state that met and even exceeded Dickens's expectations for "the republic of [his] imagination." From the mills of Lowell to the Perkins School for the Blind, it offered an alternate vision of America that influenced his future writings, while the deep and lasting friendships he formed with Bostonians gave him enduring ties to the commonwealth.

This volume provides insight from leading scholars who have begun to reassess the significance of Massachusetts in the author's life and work. The collection begins with a broad biographical and historical overview taken from the full-length narrative of the award-winning exhibition Dickens and Massachusetts: A Tale of Power and Transformation, which attracted thousands of visitors while on display in Lowell. Abundant images from the exhibition, many of them difficult to find elsewhere, enhance the story of Dickens's relationship with the vibrant cultural and intellectual life of Massachusetts. The second section includes essays that consider the importance of Dickens's many connections to the commonwealth.

Domesticity, Imperialism, and Emigration in the Victorian Novel
Diana C. Archibald
University of Missouri Press, 2002
During the nineteenth century, as millions of British citizens left for the New Worlds, hearth and home were physically moved from the heart of the empire to its very outskirts. In Domesticity, Imperialism, and Emigration in the Victorian Novel, Diana Archibald explores how such demographic shifts affected the ways in which Victorians both promoted and undermined the ideal of the domestic woman. Drawing upon works by Elizabeth Gaskell, Anthony Trollope, Samuel Butler, Charles Dickens, Charles Reade, and William Makepeace Thackeray, the author shows how the ideals of womanhood and home promoted by domestic ideology in many ways conflict with the argument in favor of immigration to imperial destinations.
According to Coventry Patmore and John Ruskin, and some of their contemporaries, woman’s natural domain is the home, and a woman’s fulfillment lies at the hearthside. But would any hearth do as long as it was hallowed by the presence of a domestic goddess, or was this Victorian definition of home more discriminating? Although the ideal of the domestic woman was certainly affected by these mass movements, in many texts the definition of her becomes narrow and unattainable, for she must not only be an “angel,” but she must also be English and remain at home.
A rather predictable pattern emerges in almost every Victorian novel that encounters the New Worlds: if an English hero is destined for a happy ending, he either marries an English angel-wife and brings her with him to the New World or, more often, abandons thoughts of settling abroad and returns to England to marry and establish a home. This pattern seems to support the supposedly complementary ideologies of domesticity and imperialism. England, according to imperialist dogma, was the righteous center of a powerful empire whose mission was to “civilize” the rest of the world. The purpose of the domestic “angel” was to provide the moral center of a sacred space, and what is more sacred to such a scheme than English soil? A true “angel” should be English. Despite the mass migrations of the nineteenth century, home remains fundamentally English.
The literary texts, however, reveal much ambivalence toward this domestic ideal. Often the colonial and native women were seen as foils for the English “angels” because they were much more interesting and attractive. At times, domestic and imperialist ideologies themselves conflicted. Female emigrants were desperately needed in the colonies; thus, a woman’s imperial duty was to leave England. Yet her womanly duty
told her to remain an untainted idol beside an English hearthside. The domestic ideal, then, because of its firm alliance with nationalism, seems to have been more in conflict with imperialistic ideology than heretofore supposed.
[more]