Srinivas Aravamudan here reveals how Oriental tales, pseudo-ethnographies, sexual fantasies, and political satires took Europe by storm during the eighteenth century. Naming this body of fiction Enlightenment Orientalism, he poses a range of urgent questions that uncovers the interdependence of Oriental tales and domestic fiction, thereby challenging standard scholarly narratives about the rise of the novel.

More than mere exoticism, Oriental tales fascinated ordinary readers as well as intellectuals, taking the fancy of philosophers such as Voltaire, Montesquieu, and Diderot in France, and writers such as Defoe, Swift, and Goldsmith in Britain. Aravamudan shows that Enlightenment Orientalism was a significant movement that criticized irrational European practices even while sympathetically bridging differences among civilizations. A sophisticated reinterpretation of the history of the novel, Enlightenment Orientalism is sure to be welcomed as a landmark work in eighteenth-century studies.
[more] 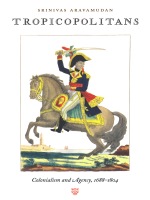 Tropicopolitans
Colonialism and Agency, 1688–1804
Srinivas Aravamudan
Duke University Press, 1999
In Tropicopolitans Srinivas Aravamudan reconstructs the colonial imagination of the eighteenth century. By exploring representations of peoples and cultures subjected to colonial discourse, he makes a case for the agency—or the capacity to resist domination—of those oppressed. Aravamudan’s analysis of texts that accompanied European commercial and imperial expansion from the Glorious Revolution through the French Revolution reveals the development of anticolonial consciousness prior to the nineteenth century.
“Tropicalization” is the central metaphor of this analysis, a term that incorporates both the construction of various dynamic tropes by which the colonized are viewed and the site of the study, primarily the tropics. Tropicopolitans, then, are those people who bear and resist the representations of colonialist discourse. In readings that expose new relationships between literary representation and colonialism in the eighteenth century, Aravamudan considers such texts as Behn’s Oroonoko, Defoe’s Robinson Crusoe and Captain Singleton, Addison’s Cato, and Swift’s Gulliver’s Travels and The Drapier’s Letters. He extends his argument to include analyses of Johnson’s Rasselas, Beckford’s Vathek, Montagu’s travel letters, Equiano’s autobiography, Burke’s political and aesthetic writings, and Abbé de Raynal’s Histoire des deux Indes. Offering a radical approach to literary history, this study provides new mechanisms for understanding the development of anticolonial agency.
Introducing eighteenth-century studies to a postcolonial hermeneutics, Tropicopolitans will interest scholars engaged in postcolonial studies, eighteenth-century literature, and literary theory.