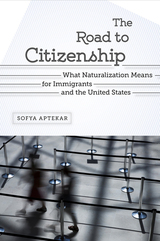 The Road to Citizenship
What Naturalization Means for Immigrants and the United States
Aptekar, Sofya
Rutgers University Press, 2015
Between 2000 and 2011, eight million immigrants became American citizens. In naturalization ceremonies large and small these new Americans pledged an oath of allegiance to the United States, gaining the right to vote, serve on juries, and hold political office; access to certain jobs; and the legal rights of full citizens.
In The Road to Citizenship, Sofya Aptekar analyzes what the process of becoming a citizen means for these newly minted Americans and what it means for the United States as a whole. Examining the evolution of the discursive role of immigrants in American society from potential traitors to morally superior “supercitizens,” Aptekar’s in-depth research uncovers considerable contradictions with the way naturalization works today. Census data reveal that citizenship is distributed in ways that increasingly exacerbate existing class and racial inequalities, at the same time that immigrants’ own understandings of naturalization defy accepted stories we tell about assimilation, citizenship, and becoming American. Aptekar contends that debates about immigration must be broadened beyond the current focus on borders and documentation to include larger questions about the definition of citizenship.
Aptekar’s work brings into sharp relief key questions about the overall system: does the current naturalization process accurately reflect our priorities as a nation and reflect the values we wish to instill in new residents and citizens? Should barriers to full membership in the American polity be lowered? What are the implications of keeping the process the same or changing it? Using archival research, interviews, analysis of census and survey data, and participant observation of citizenship ceremonies, The Road to Citizenship demonstrates the ways in which naturalization itself reflects the larger operations of social cohesion and democracy in America.
[more]