1 books by Any, Carol 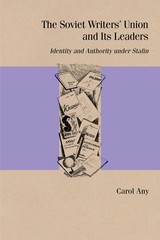 The Soviet Writers' Union and Its Leaders
Identity and Authority under Stalin
Carol Any
Northwestern University Press, 2020

The Soviet Writers’ Union offered writers elite status and material luxuries in exchange for literature that championed the state. This book argues that Soviet ruler Joseph Stalin chose leaders for this crucial organization, such as Maxim Gorky and Alexander Fadeyev, who had psychological traits he could exploit. Stalin ensured their loyalty with various rewards but also with a philosophical argument calculated to assuage moral qualms, allowing them to feel they were not trading ethics for self‑interest.

Employing close textual analysis of public and private documents including speeches, debate transcripts, personal letters, and diaries, Carol Any exposes the misgivings of Writers’ Union leaders as well as the arguments they constructed when faced with a cognitive dissonance. She tells a dramatic story that reveals the interdependence of literary policy, communist morality, state‑sponsored terror, party infighting, and personal psychology. This book will be an important reference for scholars of the Soviet Union as well as anyone interested in identity, the construction of culture, and the interface between art and ideology.