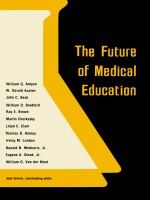 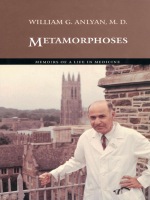 Metamorphoses
Memoirs of a Life in Medicine
William G. Anlyan, M. D.
Duke University Press, 2004
William G. Anlyan, a dedicated doctor and gifted administrator, was a leader in the transformation of Duke University Hospital from a regional medical center into one of America’s foremost biomedical research and educational institutions. Anlyan’s fifty-five-year career at Duke University spanned a period of extraordinary change in the practice of medicine. He chronicles those transformations—and his role in them—in this forthright memoir.

Born in Alexandria, Egypt, in 1925, and schooled in the British tradition, Anlyan attended Yale University as an undergraduate and medical student before coming to the relatively unknown medical school at Duke University in 1949 for an internship in general and thoracic surgery. He stayed on, first as a resident, then as a staff surgeon. By 1961, he was a full professor of surgery. In 1964, Anlyan was named dean of the medical school, the first in a series of administrative posts at the medical school and hospital. Anlyan’s role in the transformation of the Duke University Medical Center into an internationally renowned health system is manifest: he restructured the medical school and hospital and supervised the addition of almost four million square feet of new or renovated space. He hired outstanding administrators and directed a staff that instituted innovative programs and groundbreaking research centers, such as the Cancer Center and the Physician’s Assistant Program.

Anlyan describes a series of metamorphoses in his own life, in the world of medicine, in Durham, and at Duke. At the time of his prep school upbringing in Egypt, medicine was a matter of controlling infectious diseases like tuberculosis and polio. As he became an immigrant medical student and then a young surgeon, he observed vast advances in medical practice and changes in the financing of medical care. During his tenure at Duke, Durham was transformed from a sleepy mill and tobacco town into the “City of Medicine,” a place where patients routinely travel for open-heart surgery and cutting-edge treatments for cancer and other diseases.

Anyone interested in health care, medical education, and the history of Duke University will find Anlyan’s memoir of interest.