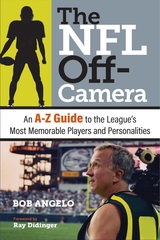 The NFL Off-Camera
An A–Z Guide to the League's Most Memorable Players and Personalities
Bob Angelo
Temple University Press, 2023
During his four-decade career at NFL Films, writing and directing segments for weekly highlight shows and national telecasts, Bob Angelo saw and heard things that never made their way into his productions. Now, in The NFL Off-Camera, Angelo mines the thousands of interviews he conducted to compile a revealing collection of short, insightful essays profiling his favorite—and least favorite—pro football players, coaches, team owners, executives, and broadcasters—all of whom he interacted with personally.

Angelo effuses about his meeting with the larger-than-life Jim Brown and appreciates the trash talking John Randle. He poignantly reflects on “Bullet” Bob Hayes, the world's fastest man who “could not outrun his demons,” and showcases the mercurial Duane Thomas and the free-wheeling Tony Siragusa. The NFL Off-Camera reveals the warning Angelo received about Hall-of-Fame player turned broadcaster, Frank Gifford, and demonstrates why Super Bowl champion head coach, Sean Payton is his “least favorite person in pro football.”

From Jared Allen to Jim Zorn, The NFL Off-Camera explores nearly 100 of the game’s outsized personalities and debunks some of football's most enduring myths. Angelo’s original, unfiltered look at Pro Football is as hard-hitting and exciting as any one of his NFL Films.