1 books by Anderson, Wayne I. 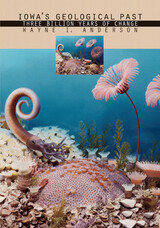 Iowa's rock record is the product of more than three billion years of geological processes. The state endured multiple episodes of continental glaciation during the Pleistocene Ice Age, and the last glacier retreated from Iowa a mere (geologically speaking) twelve thousand years ago. Prior to that, dozens of seas came and went, leaving behind limestone beds with rich fossil records. Lush coal swamps, salty lagoons, briny basins, enormous alluvial plains, ancient rifts, and rugged Precambrian mountain belts all left their mark. In Iowa's Geological Past, Wayne Anderson gives us an up-to-date and well-informed account of the state's vast geological history from the Precambrian through the end of the Great Ice Age.

Anderson takes us on a journey backward into time to explore Iowa's rock-and-sediment record. In the distant past, prehistoric Iowa was covered with shallow seas; coniferous forests flourished in areas beyond the continental glaciers; and a wide variety of animals existed, including mastodon, mammoth, musk ox, giant beaver, camel, and giant sloth.

The presence of humans can be traced back to the Paleo-Indian interval, 9,500 to 7,500 years ago. Iowa in Paleozoic time experienced numerous coastal plain and shallow marine environments. Early in the Precambrian, Iowa was part of ancient mountain belts in which granite and other rocks were formed well below the earth's surface.

The hills and valleys of the Hawkeye State are not everlasting when viewed from the perspective of geologic time. Overall, Iowa's geologic column records an extraordinary transformation over more than three billion years. Wayne Anderson's profusely illustrated volume provides a comprehensive and accessible survey of the state's remarkable geological past.