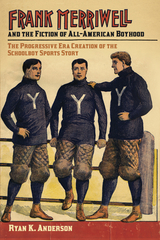 Frank Merriwell and the Fiction of All-American Boyhood
The Progressive Era Creation of the Schoolboy Sports Story
Ryan K. Anderson
University of Arkansas Press, 2015
Gilbert Patten, writing as Burt L. Standish, made a career of generating serialized twenty-thousand-word stories featuring his fictional creation Frank Merriwell, a student athlete at Yale University who inspired others to emulate his example of manly boyhood. Patten and his publisher, Street and Smith, initially had only a general idea about what would constitute Merriwell’s adventures and who would want to read about them when they introduced the hero in the dime novel Tip Top Weekly in 1896, but over the years what took shape was a story line that capitalized on middle-class fears about the insidious influence of modern life on the nation’s boys.

Merriwell came to symbolize the Progressive Era debate about how sport and school made boys into men. The saga featured the attractive Merriwell distinguishing between “good” and “bad” girls and focused on his squeaky-clean adventures in physical development and mentorship. By the serial’s conclusion, Merriwell had opened a school for “weak and wayward boys” that made him into a figure who taught readers how to approximate his example.

In Frank Merriwell and the Fiction of All-American Boyhood, Anderson treats Tip Top Weekly as a historical artifact, supplementing his reading of its text, illustrations, reader letters, and advertisements with his use of editorial correspondence, memoirs, trade journals, and legal documents. Anderson blends social and cultural history, with the history of business, gender, and sport, along with a general examination of childhood and youth in this fascinating study of how a fictional character was used to promote a homogeneous “normal” American boyhood rooted in an assumed pecking order of class, race, and gender.
[more]