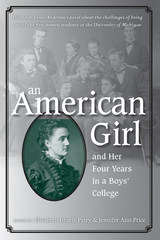 Will's challenges mirror those of other women college students of the era, including the reactions of male faculty and students, relationships with other women students and with family and friends back home, and social attitudes toward the women's movement and liberal religious values. The editors' engaging introduction places the novel in its relevant historical and literary contexts, as do helpful annotations throughout the text.

"The 1870s were an important moment of debate over women's roles and responsibilities. What's here is very interesting not only about higher education, and 'strong-minded women,' but about religion, domesticity, independence, marriage, and homosocial bonding."
--Carol Lasser, Oberlin College