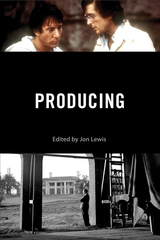 Producing
Lewis, Jon
Rutgers University Press, 2015
Of all the job titles listed in the opening and closing screen credits, producer is certainly the most amorphous. There are businessmen (and women)-producers, writer-director- and movie-star-producers; producers who work for the studio; executive producers whose reputation and industry clout alone gets a project financed (though their day-to-day participation in the project may be negligible). The job title, regardless of the actual work involved, warrants a great deal of prestige in the film business; it is the credited producers, after all, who collect the Oscar for Best Picture. But what producers do and what they don’t or won’t do varies from project to project.
Producing is the first book to provide a comprehensive overview of the roles that producers have played in Hollywood, from the dawn of the twentieth century to the present day. It introduces readers to the colorful figures who helped to define and reimagine the producer’s role, including inventors like Thomas Edison, moguls like Darryl F. Zanuck, entrepreneurs like Walt Disney, and mavericks like Roger Corman. Readers also get an inside look at the less glamorous jobs producers have often performed: shepherding projects through many years of development, securing financial backers, and supervising movie shoots.
The latest book in the acclaimed Behind the Silver Screen series, Producing includes essays written by seven film scholars, each an expert in a different period of cinema history. Together, they give readers a full picture of how the art and business of producing films has changed over time—and how the producer’s myriad job duties continue to evolve in the digital era.
[more]